You are here: Home / Scientific Papers / Determinants of Prenatal Exposure to Polybrominated Diphenyl Ethers (PBDEs) Among Urban, Minority Infants Born Between 1998 and 2006.

Determinants of Prenatal Exposure to Polybrominated Diphenyl Ethers (PBDEs) Among Urban, Minority Infants Born Between 1998 and 2006.

Download:
Download this document in PDF format: Determinants of Prenatal Exposure to Polybrominated Diphenyl Ethers (PBDEs) Among Urban, Minority Infants Born Between 1998 and 2006.

Abstract
Polybrominated diphenyl ethers (PBDEs) are environmentally persistent chemicals that structurally resemble legacy pollutants, such as polychlorinated biphenyls (PCBs). PBDEs were added to consumer products for over 30 years, before being phased out due to evidence of toxicity. We examined temporal changes in prenatal exposure to PBDEs, as well as other sources of variation. We measured PBDEs in umbilical cord plasma from 327 minority infants born in New York City between 1998 and 2006. We used linear regression to examine changes in concentrations over time and in relation to lifestyle characteristics collected during pregnancy. We detected BDE-47 in 80% of samples with a geometric mean concentration of 14.1 ng/g lipid. Ethnicity was the major determinant of PBDE exposure; African American infants had 58% higher geometric mean cord plasma concentrations of BDE-47 (p < 0.01) compared to Dominican infants. Notably, African American mothers were more likely to be born in the United States, which itself was associated with 40% (p < 0.01) higher concentrations. We observed small decreases in PBDE concentrations by date of birth and no difference before and after their phase-out in 2004. Final multivariable models explained 8–12% of variability in PBDE concentrations depending on the congener. Our finding that prenatal exposure to PBDEs decreased only modestly between 1998 and 2006 is consistent with the persistent properties of PBDEs and their ongoing release from existing consumer products. 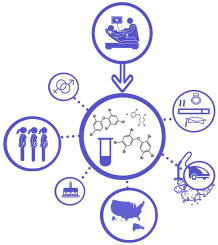